We've seen a lot of fantastic Probot Apps pop up that have helped people automate all the things, but there's a whole feature-set that many apps aren't taking advantage of.

Let's take a look at some features of Probot by digging into the codebase, and explore how to bring interactivity to your Probot App.

Probot as an Express server

Something that is often overlooked is that Probot, at its core, is an Express server with a fancy POST endpoint for handling webhook payloads:

The above snippet is taken from Probot's codebase, and illustrates the internals.

Here we're effectively registering the webhook router as a regular old middleware (an instance of @octokit/webhooks).

This is important because wherever we are in our Probot app, we can access and use the internal Express server.

This method is a great way to grab the Express server and start doing stuff with it. You can add middleware, routes - it really is a regular Express server! The one "gotcha" is that Probot's internal routes are registered before your app's code is run, so middleware won't apply retroactively.

You can now make use of Probot's authentication functionality outside of the webhook handler. Let's create a GET route that will respond with the app's identity - we'll use an Octokit client that's authenticated as the app:

Pretty rad - we've accessed data in our Probot App that is in no way tied to a webhook payload. This is a key part of building apps that don't just respond to events, but truly integrate with GitHub.

A little known part of GitHub Apps (and by extension, Probot) is that users can "log in" using the regular OAuth flow. Your GitHub App has some credentials (a client ID and secret) that can be used to ask GitHub who the user is:

First, we expose a /login route where we redirect the user to GitHub with some special query params:

After the user goes to GitHub, they'll be presented with an Authorize screen. They'll decide to authorize, which will send them back to your app's Callback URL. We'll define this as /login/cb, but you'll also need to set it in your GitHub App:

Nothing above looks like your average Probot code, but it can be paired with a regular old Probot App. By allowing users to log in to the browser, there's a whole world of possibilities.

A great example is probot-invite. Once the app is installed in an organization, admins of that org can visit the app in the browser and generate a link to invite other users to that organization: 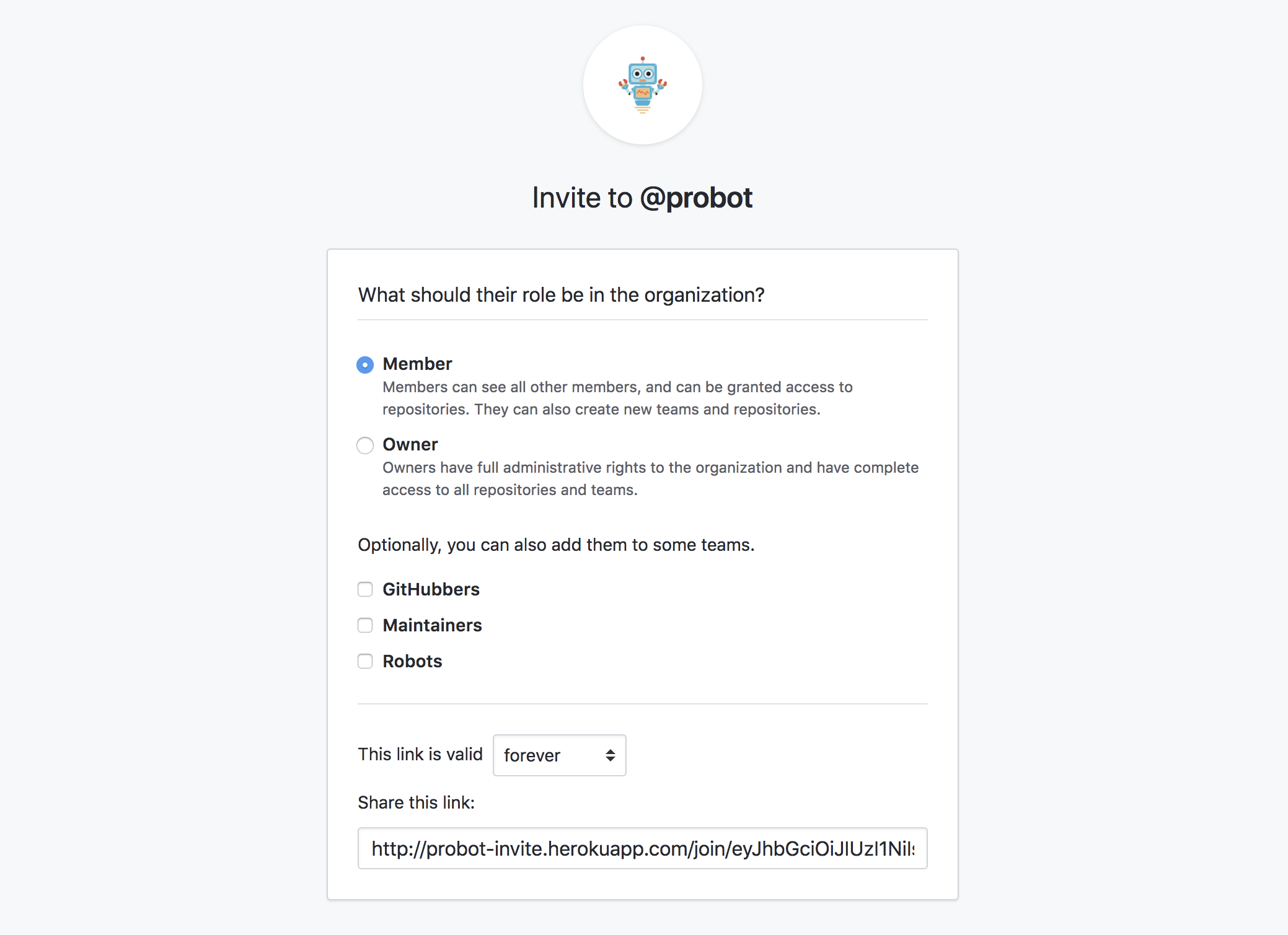 This is the project I work on at GitHub. It's a weird combination of Probot, the GitHub API and YAML (it's fascinating I promise). In Learning Lab, we make a ton of different requests; sometimes on behalf of the user and other times on behalf of the app itself, as a sort of third-party actor.

The above screenshot represents a simple example of a course on Learning Lab - when the internal Probot instance receives a webhook event for a closed issue, it'll update the page to check off that step. The UI for this lives on https://lab.github.com - totally separate from GitHub itself.

If you want to learn more about how Learning Lab works, you can watch this talk - I go into the nitty gritty of it!

Folks in the Probot community have built a really amazing app that ties together repositories in their company. From the README of the repository:

The FYI application was built... to stay on top of their growing technology portfolio of systems (sites, apps, apis) distributed across hundreds of repositories in multiple GitHub organizations.

Now you should have the information you need to build a Probot app that both listens to webhooks and exposes a UI for users to interact with. You can still take it further, by using the access_token to make user-to-server requests on behalf of the user, opening up new possibilities for fetching data that is scoped to the user.

Here's a realistic example of where we'd want to use this functionality. Let's imagine a data-tracking integration, where we want to store metrics of commit activity in our GitHub repository. This is just a thought experiment - we won't go too deep into building this for real, though you certainly could!

We want to store more detailed information than what the GitHub API provides up front, like the size of each commit or how many times a certain file was changed - so we listen for the push event and store that data in our database.

But now that we have this information, we need to show it somewhere! GitHub doesn't currently have really extensible ways to share things into the UI, so we'll build our own 🎨

When used with a library like cookie-session, your app can persist user sessions - so users visiting your site will stay logged in.

We don't want users to see data for repositories they don't have access to. We need to ask GitHub if the user in question can see the repo - we can accomplish this in a couple of different ways. One method is to try requesting the details of the repo as the user - if it throws a 404 error, it means the user can't see the repo:

Last but not least, we need to create a page that will actually display this information. Just like with any web app, there are a million ways you could do this - I'm a fan of a templating language called Nunjucks for server-renderable things like this, but there really aren't any restrictions.

Ultimately, once you get the hang of extracting Probot's Express server, you're building a web app. The possibilities are endless! I can write about practical applications for this concept for a long time - if you're interested in hearing more, let me know!